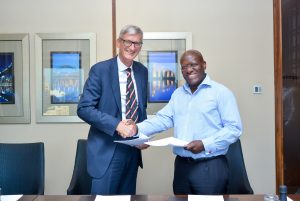 Tatu City has announced a sponsorship of KES 5M for the Kenya 15’s rugby team, positioning Tatu City as the official Test Series sponsor and Test Match sponsor for the encounter between Kenya and Germany on May 27, 2017, in Nairobi. The sponsorship is part of Tatu City’s long-term plan to improve and develop sports in Kenya, and contribute to the socio-economic well-being of Kenyans.

Speaking at the sponsorship announcement ceremony, Stephen Jennings, the founder and CEO of Rendeavour, the owner and developer of Tatu City, lauded the efforts being made by the Rugby Union and other parties towards sports development in the country. “We are pleased to be playing a pivotal role in this endeavour and wish the 15’s team the very best during the test match.”

Kenya Rugby Union Chairman Richard Omwela said, “This sponsorship will go a long way in supporting our 15’s team as they prepare for the test match and for the upcoming World Cup qualifiers. We would like to thank Tatu City for its unwavering support for the second year running.”

Tatu City is redefining urban development in Kenya by providing a benchmark for living and working spaces, schools and hospitals that will help sustain and accelerate Kenya’s economic growth, meet the aspirations of the burgeoning middle class and serve as a catalyst for further economic development.

Tatu City is a 5,000-acre, mixed-use development with homes, schools, offices, a shopping district, medical clinics, nature areas, a sport & entertainment complex and manufacturing area for more than 150,000 residents and tens of thousands of day visitors. Schools and businesses are already open at Tatu City, and a range of houses are under construction to suit all incomes. Tatu City represents a new way of living and thinking for all Kenyans, creating a unique live, work and play environment that is free from traffic congestion and long-distance commuting.