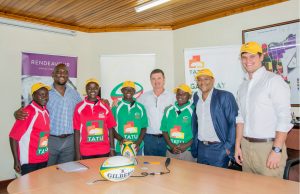 The sponsorship is part of Tatu City’s long-term commitment to improve and develop sports in Kenya by nurturing talent at the grassroots level, through local community initiatives that improve social and economic well-being.

The rugby clinic will initially target children attending Tatu Primary School, with subsequent plans to include students from four other schools in the neighbouring area.

From this May, SRF will conduct three training sessions per week in the school, either during P.E. lessons or after school and will engage a team of four coaches per session training up to 120 boys and girls. In the upcoming months, the clinic will include other schools in the Tatu City Area for a maximum of 5 schools. Schools in the area will get to compete against each other in inter-scholastic competitions once training has been completed. As part of the clinic, children taking part in the project will also receive life skills training.

Speaking at the sponsorship announcement ceremony, Tito Oduk, Commercial Sales Manager Tatu City said, “The project seeks to equip young men and women in the Tatu City area with skills to play competitive rugby, with the hope of creating a new crop of players that will represent Kenya on the global stage. It is also an opportunity to equip the children with practical life skills.”

SRF founder, Azim Deen, said, “We are certain that our partnership with Tatu City will create a new pool of rugby talent which will enable Kenya to reach unprecedented success, in both the 15-a-side and sevens teams, in the coming years. We hope our program, which is primarily aimed at the informal settlements, will arm our youth with key skills and a belief that they can fulfil their dreams. “The unveiling of the partnership comes against the backdrop of Tatu City’s announcement of its support for the Kenya 15s team for a second year running, in a move that will see Tatu City become the official Test Series sponsor and Test Match sponsor for the encounter between Kenya and Germany on May 27, 2017, in Nairobi – further underpinning Tatu’s commitment to the growth and development of sports in the country.

SRF operates a Sport for Development Program that aims at bringing positive social change through rugby and teaching of life skills to children living in both informal settlements and rural settings in Kenya. Today, SRF is working in over 25 primary and secondary schools in Nairobi reaching over 1’500 boys and girls (aged 10 to 18) on a weekly basis. SRF organizes Sunday sessions in the settlements, as well as rugby tournaments during school holidays. Since 2016, SRF has launched its own Life Skills program which has already reached over 1’000 beneficiaries in Nairobi.

We use cookies on our website to give you the most relevant experience by remembering your preferences and repeat visits. By clicking “Accept All”, you consent to the use of ALL the cookies. However, you may visit "Cookie Settings" to provide a controlled consent.
Cookie SettingsAccept All
Manage consent

This website uses cookies to improve your experience while you navigate through the website. Out of these, the cookies that are categorized as necessary are stored on your browser as they are essential for the working of basic functionalities of the website. We also use third-party cookies that help us analyze and understand how you use this website. These cookies will be stored in your browser only with your consent. You also have the option to opt-out of these cookies. But opting out of some of these cookies may affect your browsing experience.
Necessary Always Enabled
Necessary cookies are absolutely essential for the website to function properly. These cookies ensure basic functionalities and security features of the website, anonymously.
Functional
Functional cookies help to perform certain functionalities like sharing the content of the website on social media platforms, collect feedbacks, and other third-party features.
Performance
Performance cookies are used to understand and analyze the key performance indexes of the website which helps in delivering a better user experience for the visitors.
Analytics
Analytical cookies are used to understand how visitors interact with the website. These cookies help provide information on metrics the number of visitors, bounce rate, traffic source, etc.
Advertisement
Advertisement cookies are used to provide visitors with relevant ads and marketing campaigns. These cookies track visitors across websites and collect information to provide customized ads.
Others
Other uncategorized cookies are those that are being analyzed and have not been classified into a category as yet.
SAVE & ACCEPT
Powered by