The incoming Form 1 class is officially full with a waitlist at the newly built campus of Nova Pioneer, a leading pan-African school network whose Nairobi flagship campus is located in Tatu City, the mixed-use, mixed-income satellite city development outside Nairobi.

“We are delighted to now host our young innovators and leaders at a purpose-built campus, designed specifically to deliver our innovative approach to 8-4-4 education,” said Chris Khaemba, Director, Nova Pioneer. “We would like to thank Tatu City for providing all the infrastructure that has made this possible.”

After breaking ground at the site in October 2016, construction and infrastructure was provided in record time. Tatu City delivered the infrastructure critical for the successful operation
of the school including paved roads, connection to sewer line, water connection, power and the installation of a security fence on the outer boundary. 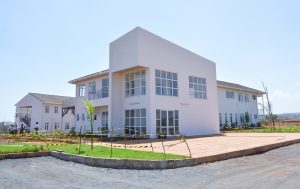 “To have Nova Pioneer open their flagship campus at Tatu City is testament to the hard work from all involved,” said Nick Langford, Country Head for Rendeavour, Tatu City’s owner and developer. “Education is a vital component of our mixed-use offering and it is notable that the school was oversubscribed with a considerable waitlist before opening. This demonstrates Tatu City is clearly becoming a destination within greater Nairobi.”

Nova Pioneer, which is co-founded by former Alliance Principal Chris Khaemba, is situated on 20 acres of land adjacent to Kijani Ridge, the first residential development at Tatu City.

The purpose-built campus has been designed specifically to facilitate Nova’s innovative approach to education and currently includes state of the art dormitories, classrooms, an administration building, and a dual kitchen and dining building. Upon completion in 2019, the campus will be home to four separate campuses: a secondary boarding boys school, a secondary boarding girls school, a primary day school, and a preprimary.

Nova Pioneer is a rapidly growing education company developing and operating world class, affordable secondary, primary, secondary, and pre-primary schools across the African continent. Nova Pioner is currently operational in both Kenya and South Africa, and will have eight schools by 2018. The network’s unique learning approach prepares students to be globally competitive innovators and leaders in the 21st century. Their leadership team is comprised of director Chris Khaemba, a career educator, who is widely known in Kenya and beyond for his exemplary work at Alliance High School and African Leadership Academy in South Africa. CEO Chinezi Chijioke, is a graduate of Harvard and Stanford, previously led McKinsey & Company’s Education practice in Africa. Oliver Sabot, East Africa MD, founded two educational organizations in Kenya and Rwanda, and formerly served as a Vice President for the Clinton Foundation. Damany Gibbs, the group’s COO and a graduate of Harvard and Oxford, was previously a founding team member of Bain & Company’s Africa practice, having started his career with investment bank Morgan Stanley.  Dai Ellis, the group’s Chief Academic Officer, is a graduate of Yale and recently served as CEO of Excel Academy Charter Schools in the U.S.A.

We use cookies on our website to give you the most relevant experience by remembering your preferences and repeat visits. By clicking “Accept All”, you consent to the use of ALL the cookies. However, you may visit "Cookie Settings" to provide a controlled consent.
Cookie SettingsAccept All
Manage consent

This website uses cookies to improve your experience while you navigate through the website. Out of these, the cookies that are categorized as necessary are stored on your browser as they are essential for the working of basic functionalities of the website. We also use third-party cookies that help us analyze and understand how you use this website. These cookies will be stored in your browser only with your consent. You also have the option to opt-out of these cookies. But opting out of some of these cookies may affect your browsing experience.
Necessary Always Enabled
Necessary cookies are absolutely essential for the website to function properly. These cookies ensure basic functionalities and security features of the website, anonymously.
Functional
Functional cookies help to perform certain functionalities like sharing the content of the website on social media platforms, collect feedbacks, and other third-party features.
Performance
Performance cookies are used to understand and analyze the key performance indexes of the website which helps in delivering a better user experience for the visitors.
Analytics
Analytical cookies are used to understand how visitors interact with the website. These cookies help provide information on metrics the number of visitors, bounce rate, traffic source, etc.
Advertisement
Advertisement cookies are used to provide visitors with relevant ads and marketing campaigns. These cookies track visitors across websites and collect information to provide customized ads.
Others
Other uncategorized cookies are those that are being analyzed and have not been classified into a category as yet.
SAVE & ACCEPT
Powered by