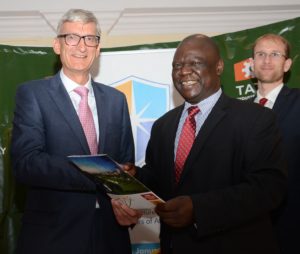 Nairobi is about to benefit from a unique partnership between a major real-estate development and a leading innovator in education to create a better Nairobi and a better Kenya. Nova Pioneer, a growing network of affordable, world class schools that is changing education across Kenya and the continent, is launching its first all-girls 8-4-4 boarding high school at Tatu City, the satellite city development near Nairobi, this coming January. Nova’s Tatu campus will become the company’s regional flagship campus for East Africa. By 2019, Nova Pioneer Tatu City will house a set of schools from pre-primary through secondary, including two single-gender boarding high schools. Nova’s boy’s school, which is currently located in Kikuyu, will move to Tatu in 2018.

“We are delighted with this site for our flagship campus which will serve as a beacon for educational excellence in the region,” said Chris Khaemba – former Principal of Alliance who is now a director at Nova Pioneer. “Tatu City enables us to reach thousands more students in a world-class learning environment to develop future innovators and leaders.”

A leading Vision 2030 project, Tatu City – which is located on 2,500 acres of rolling green landscape within minutes of the Thika Superhighway and the junction of the Northern and Eastern Bypasses — is central Nairobi’s first mixed-use, mixed-income satellite city and will ultimately cater to 100,000 residents and house offices for top local and multinational companies. Nova Pioneer, which currently operates five schools across South Africa and Kenya, and which has larger ambitions for the rest of the continent, will be Tatu City’s first education provider. Nova Pioneer’s first school in Kenya launched in January of 2016 and was full with a waitlist before the school opened. Admissions have already begun processing applications for the girls’ school at Tatu City and the competition for the 130 spots is already significant.

“Providing an education platform for future residents is vital to the growth of Tatu City,” said Nick Langford, Kenya Country Head for Rendeavour, Tatu City’s majority owner. “It is clear that Nova’s leadership team has decades of experience working with some of the leading educational institutions and companies both in Africa and around the world, creating a perfect fit with the ethos of Tatu City.”

Nova has developed a signature pedagogy to deliver the Kenyan (8-4-4) curriculum content in a new way. Its approach to learning incorporates techniques used by the most forward-thinking schools globally to develop critical thinking, problem-solving and other 21st century skills. In addition to achieving the strong exam results students need to secure top university places, Nova students learn through practice in real-world projects, problem-solving in groups, entrepreneurship, debate and public speaking, and by building digital fluency so that they are equipped to succeed post-secondary.

“The results will be that Nova students develop into leaders and innovators who are prepared to take on the world,” says Chinezi Chijioke – Nova Pioneer’s CEO, a graduate of Harvard and Stanford who most recently served as Head of McKinsey & Company’s African Education Practice. “Our learning approach prepares students to be globally competitive innovators and leaders in the 21st century, and these are the students who will go on to change the continent.”

Nova parents are already seeing the impact. “My son is transformed – he’s more confident, more responsible, happier, and more excited about learning than I’ve ever seen him,” says one Nova PTA member. “My husband and I really wanted an 8-4-4 school that was going to bring out our son’s potential, and Nova is doing just that.”

Nova’s leadership team has extensive experience growing and leading top global organizations in education, business, and philanthropy and have received graduate degrees at Harvard, Yale, Stanford, and Oxford. Its school principals have extensive experience at leading local and international educational institutions. Joy Kiano, the newly appointed girl’s school principal, holds a Ph.D. in biochemistry from the University of London and has held teaching positions in the UK and at Hillcrest school in Nairobi. Nova’s leaders have built a team of skilled teachers and instructors through a rigorous selection process, and every teacher undergoes an intensive teacher training program that prepares them to deliver the curriculum using Nova’s unique model.

Nova Academes is building its campus as Tatu City’s “live-work-play” concept takes off. The development has launched several residential areas and companies such as Unilever, Chandaria, Kim-Fay, Dormans and Maxam are building production facilities and offices within Tatu City.

Nova has formed a partnership with innovative developer TechnoConstruct to construct the first phase of its flagship campus. TechnoConstruct uses light gauge steel manufacturing technology that is increasingly used in major developments in the United States and the UK and enables Nova to achieve global standards at reasonable cost in short time.

Nova Pioneer is a rapidly growing education company developing and operating world-class, affordable secondary, primary, secondary, and pre-primary schools across the African continent. Nova Pioneer is currently operational in both Kenya and South Africa and will have five schools by 2017. The school’s unique learning approach prepares students to be globally competitive innovators and leaders in the 21st century. Their leadership team is comprised of director Chris Khaemba, a career educator, who is widely known in Kenya and beyond for his exemplary work at Alliance High School and African Leadership Academy in South Africa. CEO Chinezi Chijioke, is a graduate of Harvard and Stanford, previously led McKinsey & Company’s Education practice in Africa. Oliver Sabot, East Africa MD, founded two educational organizations in Kenya and Rwanda, and formerly served as a Vice President for the Clinton Foundation. Damany Gibbs, the group’s COO and a graduate of Harvard and Oxford, was previously a founding team member of Bain & Company’s Africa practice, having started his career with investment bank, Morgan Stanley.  Dai Ellis, the group’s Chief Academic Officer, is a graduate of Yale and recently served as CEO of Excel Academy Charter Schools in the U.S.A.

Tatu City is a 2,500-acre, mixed-use and mixed-income development with residential, commercial, industrial, tourism, social and recreation amenities for more than 100,000 residents and 30,000-day visitors. Underlying Tatu City’s design is a visionary concept aiming to shift urban development in Kenya from the familiar single node model to a decentralized urban environment. By doing so, Tatu will significantly de-congest the City of Nairobi by offering a unique live, work and play environment.