Tatu City, the mixed-use, mixed-income satellite city development on 2,500 acres near Nairobi, is sponsoring University of Nairobi students from the Department Real Estate & Construction Management (RECM) for a two-week study tour in London. 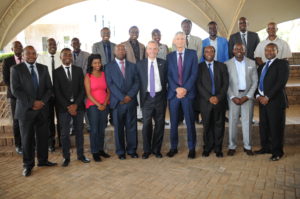 Two students Nyaila Bonface Achieng`and Naomy Wangari , were named the overall winners of an “ideas competition” which gave the students an opportunity to contribute to the master plan of Tatu City’s Central Business District. The competition focused on four subjects, namely Identity, Retail Concept, Transport and Public Spaces. “It is important for us, as an international developer, to localize our projects, and the students have provided a Kenyan view on our plans,” said Nick Langford, Country Head for Rendeavour, Tatu City’s owner and developer.

The competition was held in conjunction with Skidmore, Owings & Merrill (SOM), the U.S.-based architecture, engineering, and urban planning firm which has master planned the Tatu City CBD. U.S. Ambassador Robert Godec presented the awards to the students at the U.S. Embassy in Nairobi. The two-week, all-expenses-paid study tour will allow the winning students to work alongside globally renowned master planners and architects in the offices of SOM in London.

“The levels of talent exhibited by all the students are highly commendable,” Langford said, “and for those who will not be travelling to London we are offering select opportunities for internships at Tatu City in 2017.”

The Tatu City CBD will identify opportunities for investors, retailers, office users, education providers and residents in an inclusive and secure 24-hour-living environment.

Skidmore, Owings & Merrill (SOM) is one of the leading architecture, interior design, engineering, and urban planning firms in the world, with an 80-year reputation for design excellence and a portfolio that includes some of the most important architectural accomplishments of the 20th and 21st centuries. Since its inception, SOM has been a leader in the research and development of specialized technologies, new processes and innovative ideas, many of which have had a palpable and lasting impact on the design profession and the physical environment. The firm’s longstanding leadership in design and building technology has been honoured with more than 1,700 awards for quality, innovation, and management. The American Institute of Architects has recognized SOM twice with its highest honor, the Architecture Firm Award—in 1962 and again in 1996. The firm maintains offices in New York, Chicago, San Francisco, Los Angeles, Washington, D.C., London, Hong Kong, Shanghai, Mumbai, and Abu Dhabi.