Nairobi’s top educators and real estate developers spent the afternoon celebrating the groundbreaking of Kenya’s most exciting new boarding school for girls, opening in January 2017. Nova Pioneer, which is helmed by former Alliance Principal Chris Khaemba, will be situated on 20 acres at Tatu City, the mixed-use, mixed-income development near Nairobi. Khaemba, joined by Oliver Sabot, Managing Director of Nova Pioneer, and Nick Langford, Country Head for Rendeavour, Tatu City’s owner and developer, donned hardhats and turned the first soil at the school building site to mark the launch of full construction. Work is already underway on the all-girls 8-4-4 boarding high school, which is located right next to Kijani Ridge, the first residential development at Tatu City. 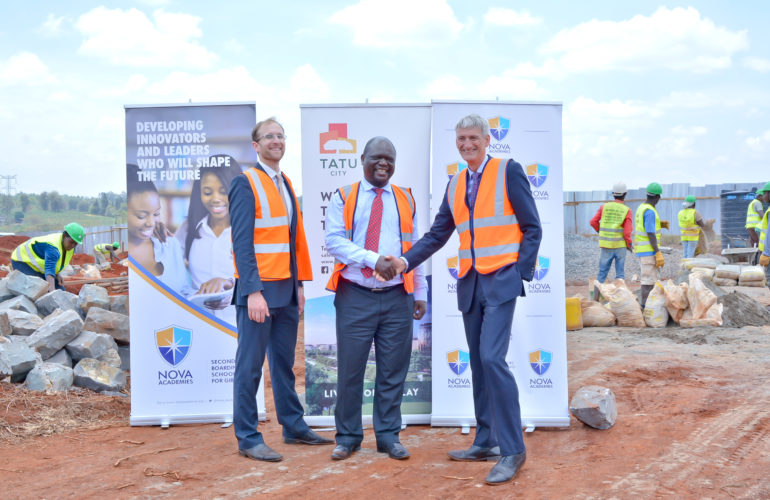 Several buildings are currently being constructed for the incoming 2017 class – including a dormitory, classrooms, an administration building, and a dual kitchen and dining building. The buildings have been designed by the award-winning architecture group Pharos, and are built by the experienced developer TechnoConstruct. Using state-of-the-art Light Gauge Steel technology, the buildings will be erected 50% faster than traditional construction methods would allow. Construction is progressing at a fast pace and on track for completion in January. Tatu City has provided the ground infrastructure that is critical for the successful completion of the construction of the school. Road paving is ongoing, along with the extension of the sewer line to Nova Pioneer plot. The main water pipes are already installed and will be commissioned by the end of the year. Placement of a transformer at Nova Pioneer site is at an advanced stage and a security fence has already been installed on the outer boundary.

Nova Pioneer, which has three schools in South Africa, launched in Kenya last year with a highly successful all-boys 8-4-4 boarding school. The school, which focus on nurturing individual talent, developing critical thinking, and equipping students with 21st century skills was full with a waitlist in its first term. This year, competition for the highly coveted spots in both the new girls school and the boys school is fierce. “We’re ecstatic about our daughter being accepted into Nova’s pioneering class” says one newly admitted parent whose daughter will be joining the incoming class of 2017. “We wanted an 8-4-4 school, but one that will prepare our child to be globally competitive. We were excited about the leadership and innovation training that she will get at Nova.”

The purpose-built campus has been designed specifically to facilitate Nova’s innovative approach to education. Classrooms, fitted with projectors and laptops, will provide seating in groups of four to allow for the group discussions and activities that form the foundation of Nova’s inquiry-based teaching model. The school also emphasizes the importance of holistic learning, and the campus will be equipped for a variety of extracurricular activities. Drama and Music club students will be able to rehearse and perform in a large fully-equipped auditorium, while Innovation club students will have space to design and create robots and other gadgets within a “Maker Space” equipped with 3D printers. Ample facilities will be provided for a variety of sports, including tennis, netball, volleyball, basketball, swimming and rugby. In addition, extensive outdoor seating space among landscaped gardens will allow a serene environment for studying and relaxing.

Nova Pioneer is a rapidly growing education company developing and operating world class, affordable secondary, primary, secondary, and pre-primary schools across the African continent. Nova Pioneer is currently operational in both Kenya and South Africa and will have five schools by 2017. The school’s unique learning approach prepares students to be globally competitive innovators and leaders in the 21st century. Their leadership team is comprised of director Chris Khaemba, a career educator, who is widely known in Kenya and beyond for his exemplary work at Alliance High School and African Leadership Academy in South Africa. CEO Chinezi Chijioke, is a graduate of Harvard and Stanford, previously led McKinsey & Company’s Education practice in Africa. Oliver Sabot, East Africa MD, founded two educational organizations in Kenya and Rwanda, and formerly served as a Vice President for the Clinton Foundation. Damany Gibbs, the group’s COO and a graduate of Harvard and Oxford, was previously a founding team member of Bain & Company’s Africa practice, having started his career with investment bank Morgan Stanley.  Dai Ellis, the group’s Chief Academic Officer,  is a graduate of Yale and recently served as CEO of Excel Academy Charter Schools in the U.S.A.